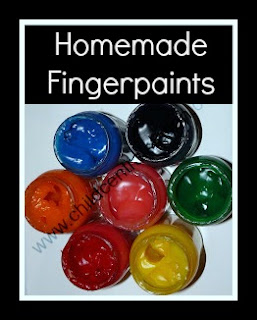 Today was an early night for us, we were done providing childcare at 4:30 p.m., which was considerably early for us considering our night time care can run until 11:30 p.m. So, for a "normal" human being, that might mean an early night??? Well perhaps in another household, but not ours :). It is nearly 1 a.m. and we are just now starting to wind down for bed.

I am continuing to find some amazing ideas and network with a variety of folks through Deborah Stewart by following her on Facebook- Teach Preschool. She brings together many people in the field of early childhood education and she regularly posts ideas she finds on blogs and websites. I have been very interested in some of the recipes she has posted, and decided that I would try out one of them tonight.

The recipe I tweaked came from a post by 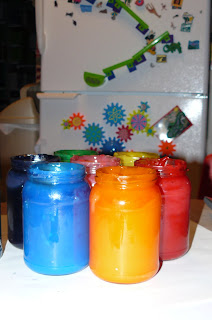 Allison at in a nutshell (you can follow the link for the recipe and directions.) When I made them, I doubled the batch and instead of using food coloring and flavoring extract I used unsweetened powdered Kool-Aid. I actually ended up making 3 different batches of the recipe. Next time, I'll know to multiply it by 6 and make one huge batch! Because the Kool-Aid is a powder, I filled each 16 oz jar half way before adding the powder, mixed it well and then continued to add the paint and mixed it thoroughly. I made 7 different colored and scented jars, and with the remaining paint, I made a smaller amount of black using Wilton food color and no scent. 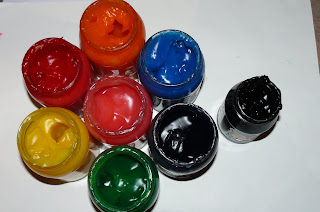 Of course, you can't just make paint and not try it out! So, Dane was the guinea pig! (Yes, he was up at midnight and more than willing to test out the new paint before his friends had the opportunity to dig into it! We are all night owls in this house, morning people only when we have to be! Dane is also homeschooled, so he can sleep in tomorrow morning.) We found that some of the paints were not as vivid as we would like so we added some food coloring to them. Perhaps next time around I will opt to use 2 packages of the food coloring instead of just one??? They smell delightful- and are BIG fun to finger paint with. We may have to do some experimenting with different food coloring for the purple paint, as it is not very purple but smells delightfully grape! It is a little too far on the blue side, and is already staining fingers quite well. Otherwise rated quite highly by our resident guinea pig, and mom too :). 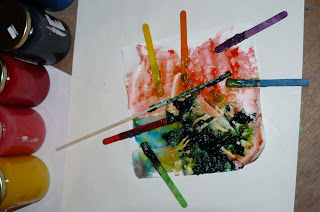 I can't wait for the reviews from the children in the morning!


This morning was definitely not an "art" morning. Much to my dismay, the children were not as excited about painting as I had hoped. However, when I mentioned that there were new paints, there were five "butts in the seats" at the table. The paints had jelled quite a bit while they cooled, and had the consistency very much like that of store bought finger paints. The scents were a definite hit! "This smells like berries! OOOOOOOOOOOOOOOH YUMMMY- just like fruit snacks!" "Ms Amy- the orange is really ORANGE!"

The children spent more time exploring the scents than they did actually finger painting, but art and activities are a process, not a product. When they did decide to dig in..... They opted to grab handfuls and blobs! Again, a wonderful process piece- overloading the cardstock pages- guishing and squishing. In terms of a "finished product" there was no way that the creations would dry in any reasonable amount of time if at all. We opted to problem solve this by using the same technique we did for our shaving cream prints and to squeegie them off. We took before and after photos for the children and parents. Hopefully the paint will dry in the thinner layer. 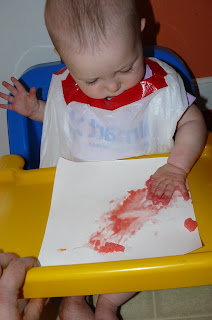 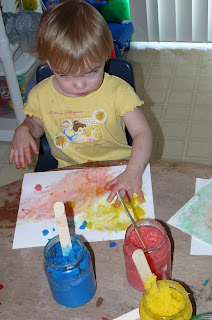 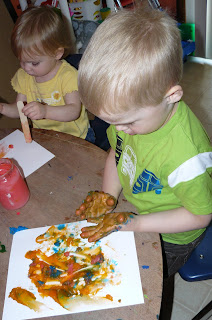 The paint does stain quite well- It's made with Kool-aid after all ;).

Next time.... I think we will stay away from the spoons/sticks to get the paint out and encourage fingers and perhaps have little finger bowls for intermittent color rinsing?? Perhaps ;).

Overall rating from the children "Awesome" "They're great!"
This post was linked up at:

This looks like so much fun Amy! Please report back on what the children thought! I'm quite interested.