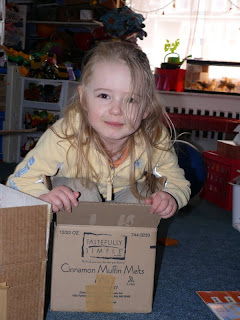 A few weeks ago, I was invited by Rachelle over at Tinkerlab to participate in a cooperative blogging challenge/event to celebrate her blogiversary! I was thrilled to be included with so many other wonderful bloggers out there, and who can turn down a chance to cooperate with other like-minded folk and to reuse something that others might just toss aside?  So, of course I said "yes"

So, this week in place of my "What Would You Do With It?" post, I'm participating in a creative challenge, from Tinker Lab that is very much along the same lines:

What would you do with a cardboard box? I know I came up with a zillion ideas of what to do with a box. We have quite a few previous posts that use cardboard boxes. They are abundant and most often free supplies to use. However, as I continued to think about this challenge, one thought kept running through my head... "K.I.S.S." 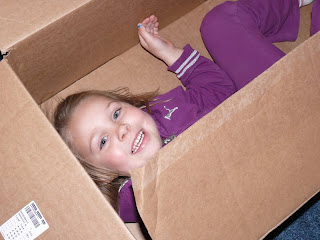 "Keep It Simple, Stupid!"  I don't really care to use the word "stupid," but the acronym seemed to fit quite well with this challenge. ( I heard this acronym at trainings years ago... I really like the alternatives "sista" or silly instead.. Thanks for the immediate feedback so I could make the changes ladies :). )  I think far too often, we as a society, mostly as adults, we forget to keep things simple. Children don't need a box to be anything more than a box. We didn't really need to make the box into anything, we just need to give the children the box and step back...... 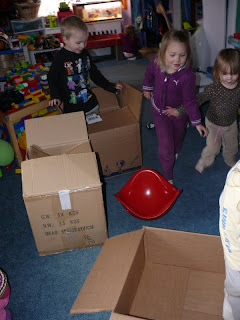 So, when the children came in from outside, they found a large collection of boxes just sitting in the room. (Have you ever seen the video "The day the boxes came" from Bev Boss?  If you haven't, I would strongly suggest finding it!) 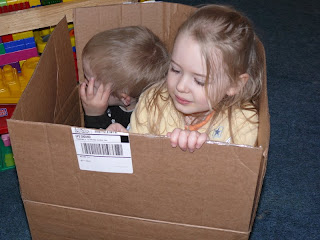 The children spent time climbing in and out of the boxes. They tried to determine how many children could fit inside each box, and they created their own "rules" for box play.  I heard one child say something along the lines of "I don't think it would be safe for more than two in this one." 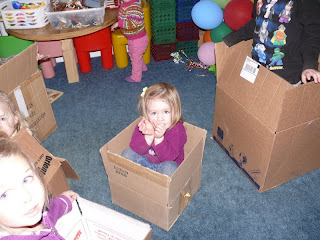 They sat in the big boxes, they sat in the little boxes. Some of the boxes turned into other things... like trains and planes.
One child walked around packaging up their friends for "special delivery" yelling "tape, tape, tape!" While another impromptu game of "Hide and Seek" or "Guess Which Box I'm In" game evolved. 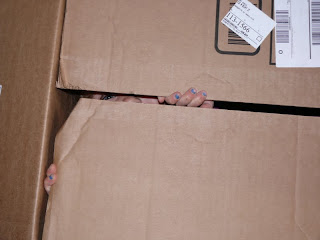 Even the youngest children in care began to participate in the box fun! After taking time to observe, they too began to imitate the actions of the other children. 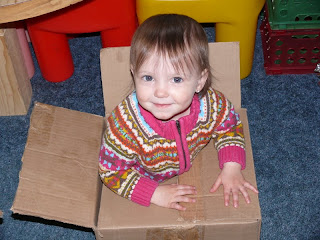 The children played with the boxes for quite some time. Then one by one, they moved on to other options, and throughout the afternoon came back to "re-try" or try something new. I left the pile in the middle of the floor, I wonder what they will do when they find them again tomorrow....

Thank you Rachelle over at Tinkerlab for inviting me to participate in this challenge! I'm honored to be included as part of your celebration with so many incredible people! (See the photo/thumbnail linky!)

Do you have a great idea for a cardboard box? Feel free to link it up below!

Email ThisBlogThis!Share to TwitterShare to FacebookShare to Pinterest
Tags creative challenge, What Would You Do With It? Wednesday

You should look for the book Not a Box to follow up this activity.
http://www.amazon.com/gp/aw/d/0061123226/ref=aw_d_iv_books?is=l
I loved that you kept it simple (sister)! It's wonderful to see what the kids will come up with on their own - and very informative.

Your kids have had loads of fun!! My girl has been playing with box ever since she started crawling:) Sad I did not have big boxes around...

We just got a box from a lawnmower yesterday and it was like a new toy for my 4 year old daughter! I happened to have the book :"Not A Box" by Antoinette Portis too...And my 4 year old daughter Loves it! She wants to make a rocket! Great minds think alike! C Loves "Not A Stick" too! Boxes are wonderful and this Challenge is making me want to go get more HUGE Boxes to play with!!!

When I was a preschool teacher we had a regular section that was just boxes. I can't believe I have failed to do the same for my little ones!!! Thank you for the reminder.

That is my kind of activity - just put it out there and let them play!!

@ Melissa - I've used Not a Stick before in my toddler class. We even made a dragon from cardboard for the kids to "battle" with their sticks. A teacher drew and cut it out but the kids stuffed it wit paper and painted it. We hung it from the play structure and gave the kids paint brushes attached to 18" sticker to paint with. When it was dry they used the sticks without the brushes. They loved it!

I added a couple of my older posts!

I love the way you approached this challenge, Amy. It's absolutely true that we don't have to expect any material to be more than what it already is, and then let the magic unfold. Thank you for being part of this challenge, and for all of the inspiration you've given me. Your kids are so lucky to have you.

Just give them the box! Do less so they can do more, that's my motto :)

This is such a spectacular read. Card board boxes are the most useful thing for the children’s. They play games with going inside through it. And they know that card board boxes would not be safe for more than two entered into it together. Thanks for sharing it.

So many fun things to do with boxes... and these kids have found some. I love it when kids play using their imaginations, helps in their creativeness.

Hey I my friends I tell you something can you give me answer please Moving boxes are generally the same weight and quality as ordinary shipping boxes, unless you purchase some made from thicker cardboard that allows for heavier packing. So, the question most people have is, should I purchase moving boxes or find some slightly-used from grocery stores or friends who've just recently moved.
Used Boxes

Hey I my friends I tell you something can you give me answer please Moving boxes are generally the same weight and quality as ordinary shipping boxes, unless you purchase some made from thicker cardboard that allows for heavier packing. So, the question most people have is, should I purchase moving boxes or find some slightly-used from grocery stores or friends who've just recently moved.
Buy Shipping Boxes