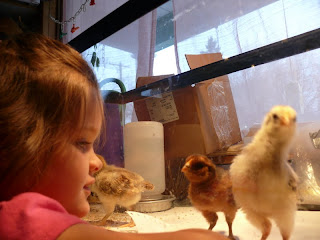 The chicks are growing! In fact they are so big that we now have a "Chick-a-Saurus Rex."  Some of the feathers, especially those around the wings and tail are starting to change.  A couple of them tried to escape today. Mr Allan found them on top of  the brooder box. (We placed a make-shift cover over it to try to stop them from escaping. However, I think the cover actually assisted them in their escape.)  We have decided to keep them until Friday, then they will go back to the farm. 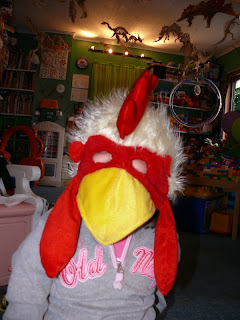 Although, I think a few of the "chickens" might stick around! It has been hilarious to watch the children imitate the baby chicks. In the first few days, one of the major observations they made was that the chicks would fall asleep standing up and almost fall over in the process. So, of course, when they pretend to be baby chickens, that is their favorite thing to do! We have also worked in some great music from Mary Jo Huff having to do with chickens- you can get a preview of some of the music here. 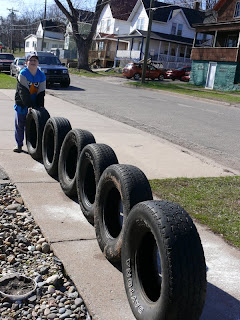 The other day, we found a pile of tires for giveaway on the side of the road! (And a few more from my friend Carol....) So, we have added them to our collection of loose parts and have started on a painted tire planting station in the rock garden. 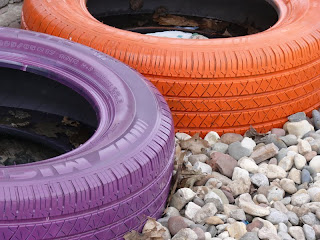 I am loving how the bright colors are looking on these tires! If the weather would cooperate a little more, we would be making more progress in this department. It has been either too wet or too windy to paint them. However, that has not stopped the children from using the tires as "loose parts." (For more information and great posts on the importance of loose parts for children, please visit let the children play. Jenny has a series of posts on this very topic!) 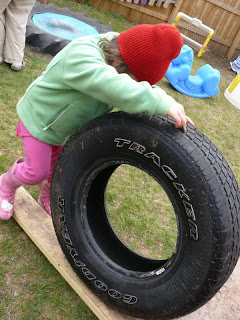 I am going to have to get my hands on a few more tires for our planting project because I don't think the children are willing to give up the ones in the yard, nor would I want them to!  They have been using them to:
And.... this is the list of things I can remember. We have had a very creative playful couple of days! 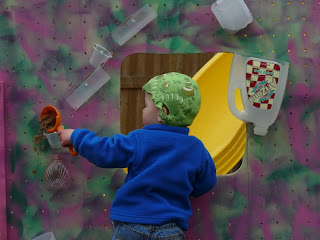 The sand and water wall is only in the second day of use. I am happy to report that more than half of the children have mastered the use of the wing nuts and bolts :). The window has become a tv screen, and I have seen some very creative television shows. If actual tv was that entertaining, I might opt to watch it more frequently! The children have also decided that the hole is a great opening for an outdoor puppet show. I anticipate that you will hear more about that in the future as they work out their performances.
by Amy A @ Child Central Station - May 03, 2011

Hey there - remember - if you are ever in this area - we have allllllll the tires you would ever need!!!

I know! It is just a matter of getting there :). (and hauling them back to Marquette!) The children have been having a great time with them. When we just had one or two, they weren't as exciting. Now, everything has to have a tire! I think it makes a big difference being that it is early spring too. They don't have as much opportunity for loose part play when everything is covered in snow!

I love this! We recently received a donation of 30 tires...I was ecstatic! Then, the other teachers started complaining. Top complaints:
-The tires make the kids' clothes dirty.
-Who's going to wash all the tires?
-Tires will bring spiders, mosquitos and snakes.
-In the summer, it will be too hot to use them (and this one, I agree with...Arizona summers reach temps of 100+ degrees on a daily basis)

So I volunteered to wash the tires with my class. It took the entire morning, and not a single child complained. Instead, they were working together cooperatively for an extended period of time, completely engaged in the activity--not something 3 year olds are known for!

I don't apologize for the tires, and I figured that if no one else wants them, I'll use them ALL! :) There are nine months of beautiful weather to get a great use out of them!

I have a question...I love the brightly colored paint. I would love to have the class paint our tires. What kind of paint did you use? Was it non-toxic?

I like the new look here Amy!
You and your children have been busy!
The tires sound like so much fun as loose parts - very creative.
I love your water wall!
Brenda

Don't you just love tires! As far as the paint goes, I've been doing a lot of investigating. I have been told that you can paint tires with any paint you would use on plastic. I have found that using a good primer gets much better results (so far!), Each of the tires is currently done with a different kind of paint. It is my experiment year to see how they hold up! I'll be able to let you know next year what worked best for us!

Brenda- Thank you! We have been very busy around here..... It is (cross your fingers) finally spring! So we are in full swing with projects!

You know how much I love loose parts Amy :) And you've painted your tyres - they look amazing. Can I ask what kind of paint you used? This is something I'd love to do with the kids at preschool.