Armed with Screwdrivers - the Demolition Crew! 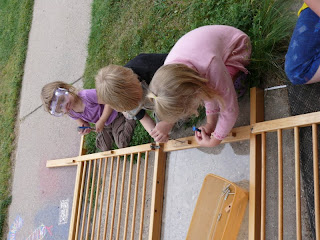 With the new standards for cribs in childcare coming into effect in a few months, there are a lot of cribs out there that will no longer be used as cribs. We don't use cribs in our home, but a friend of mine had four that she was getting rid of. It seriously ERKS me to think of all of those cribs in a landfill.  After all.... they have some perfectly good parts that can be put to use! 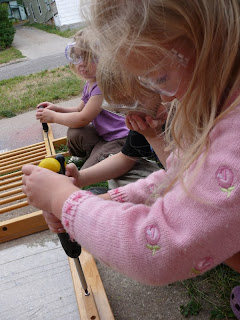 Before we could get to work making our upcycled creations, we had to take apart the cribs.  I was really excited to see that some of the cribs had plexi-glass ends. I have oodles of uses for plexiglass! 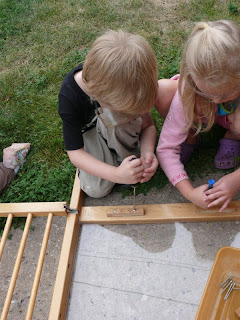 The children spent hours working with real tools - screwdrivers to be exact, taking apart the cribs! 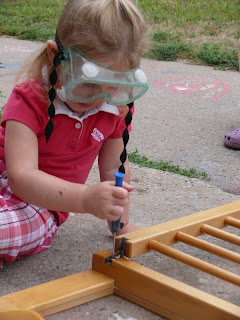 The children managed to successfully take apart two of the cribs. Their concentration was amazing, and their excitement when the screws were removed and the pieces came apart was priceless! 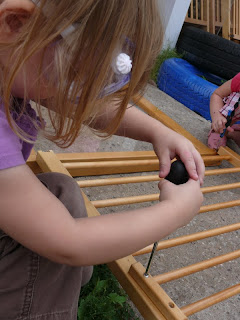 I have been collecting upcycled ideas for cribs for quite some time, and now that I'm using Pinterest- I have a board of crib ideas.  Do you have any good ideas of what to do to upcycle cribs?  I'd love to hear from you!
by Amy A @ Child Central Station - August 31, 2011

I'd love to have that cute team working for me. :-) Looks like they had a great time!

I am a new follower from the It's Playtime Link Party at Quirky Momma. If you have a chance stop by http://messforless.blogspot.com and say hi!
Thanks!

Oh how fun! This is just a great experience!

I loved this idea.