Child lead program. What does that mean?

Starting at this daycare was  a new experience for me. But I never knew how different it would be from what I was used to. I was “warned” by Ms. Amy before I started, that the center is so child directed/lead. However, until I was actually in the setting and involved did I begin noticing the differences and seeing what she really meant.
The days were not pre planned out for what the children were going to have to do, nor were they forced to learn specific things. The daycare was set up for a questioning and answer seeking environment. There were all sorts of books, games, puzzles, or toys that the children could choose from at any time. There were resources upon resources available for them to use. The children decided what they wanted to do and learn about. Things within the daycare were structured, and the enviorment was stagged to help their learning. But things were never forced on the children. This was a big deal to me. I was so used to having everything set up ahead of times, and days planned out of exactly what was going to happen. It was nice to be able to go with the flow and follow wherever the children lead.
Doing my specific learning plan was probablly the most challenging part of my internship. In any other setting it would have been a breeze. However, having the children completely used to "running the show" made it hard for me to direct activities. This was such a good learning oppurtunity for me though. I was forced to find a balance on when to go with the flow, and when to be very direct. I also learned how important setting the stage was, and learning to make conections in whichever way the children went.
During my time here at Child Central Station, I learned so many different things. However, being able to experience this completely new type of teaching was so beneficial. The children were so well behaved and I attribute that to the way the program is run. The children are not forced to do what they don't want to. They have freedom to do as they please. Which makes them much more interested in what they are doing, and pushed their learning to the limits because they actually care about whatever it is they are choosing to do. I also noticed the attitudes of the children was so much happier. There were less arguments and fights. The whole time I spent there this summer, I think I only had a handful of arguments or mishaps to deal with. That was amazing to me. Because in my previous experiences, way more of my time was spent dealing with arguments and bad behaviors than needed to be. 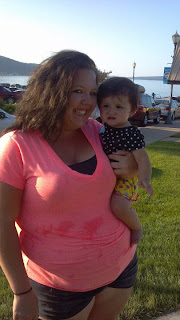 Hey! I'm Ms. Elissa. I'm a student intern at Child Central Station. I've been working under Ms. Amy and Mr. Allan all summer. I am working on getting my degree in early childhood education, and although it's been a long process, the end is near. I will be graduating in May, when I hope to joining the Americorps and move somewhere that I'm more needed. I loved doing my internship this summer and spending so much time with the kids. It was nice to finally be able to put all of the stuff I have been learning to use.

Thanks very much for your account of your time with Amy. I've always enjoyed her blog posts because you can tell the children and Amy have a lot of fun and there's so much learning happening.

At some point in the future, you may enjoy visiting other countries to see the variety of approaches used. Meanwhile I would grab a list of blogs that Amy recommends as a way of staying connected to a pre-school community with similar values.