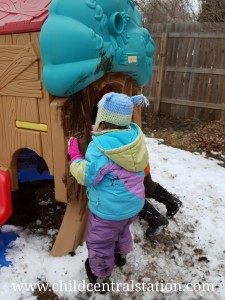 You're probably confused as to how I have a post with all kinds of snow and then days later have a post with mud... and grass... and then have a post with more snow... Well, welcome to Upper Michigan! This time of year can be super unpredictable with the weather. This year in particular we had an early thaw.. and much of the sandbox and grass has been showing! However.. that doesn't stop the snowflakes from falling! Each morning/day is a new surprise as we are uncertain what mother nature has in store! The other day, it was "warm" (in the mid to upper 40s Farenheit), with a chilly breeze, but we had a lovely patch of mud on the hill! 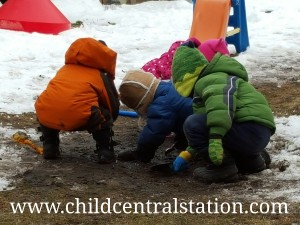 As you can see, there are various patches of mud among the various patches of  snow :). This was a lovely patch of mud for oozing between your fingers, but it was still a little chilly on your fingers... So most of the children decided to explore it with their mittens. It wasn't long before some of the children decided that our plastic tree house needed to be painted.... 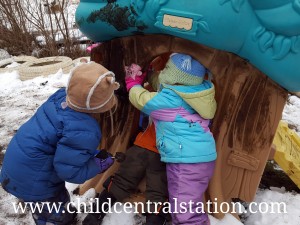 The children carried mud back and forth from the puddle to the house. Most of them using their mittens as paintbrushes... They worked to cover the house both inside and out with a a fresh coat of "paint." 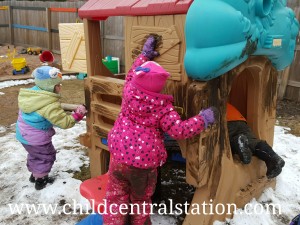 There was a lot of team work and cooperation happening. The house was just big enough for most of the children to have some space to work. Almost all of the children opted to use their mittens/gloves as paint brushes, but for those who did not... they carried small scoops of mud over to the house and just dumped the mud right on the side and watched it ooze right on down :). 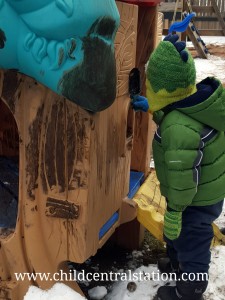 The children worked on this task for much of the afternoon, having to stop primarily because it was time to go home. The next day..... 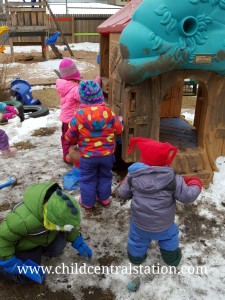 They came to find that the house was STILL painted! There was so much excitement over the fact that the mud which was now dry and hardened into dirt was still on the house. (We adults knew better than to clean it!) Painting on the second day was a bit more challenging as it was a colder day and patches of mud were harder (but not impossible) to find.... 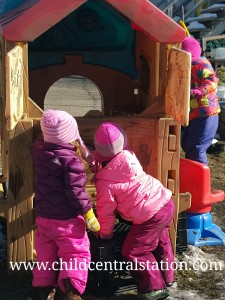 The third day of painting was much warmer and sunnier again! The children continued on their mission of painting the house.
This week, there has not been much going on with the treehouse.. mother nature has been as unpredictably predictable as ever... It has been raining! I wonder what will come next? Will the children be as interested in continuing the mud paint when they have to start all over? Are they even still interested in painting with the mud? I wonder if a adding some other kinds of brushes to the space would be appropriate? (or am I making this more complicated than it needs to be?... Maybe I need to let them explore on their own and wait for them to ask for what they need......)
Have your children been painting with mud? It was interesting to see that as soon as I posted a photo from one of the days on my Facebook page.. another provider shared a photo of a child who opted to paint with mud in her program the very same day!
I'd love to hear about your mudpaint adventures!
by Amy A @ Child Central Station - April 06, 2016